Our favorite Swedis are back with that first song “Marchin’ In” from their coming album, due in 2010.
Love the refreshing electropop ballad, and really like the vid ! Kaleidoscopic effects, transparency, and aquatic life : so now.

First, 4 trends that we saw in various other shows : zips, leather, volume layers and iridescence. The shoes are brilliant but we’ll prepare a special post about SS2010 shoes trends.

Apart from that, Alexander McQueen plays with patterns and designs dresses as if seen through a kaleidoscope. This is also a process used in recent video clips, as in Little Boots’ Remedy, and for Basement Jaxx’s comeback hit Raindrops. McQueen goes even further and drifts to Rorschach’s stains. There appear new patterns, from snake skin to skull in flames. You thought you had seen anything possible in the biker codes use ? This is very clever indeed.

Samouraïs have certainly inspired the designer, for his strong shoulders costumes, and there’s a general feeling of body structure, as we see the feminine countess hips. French Grazia or ELLE – can’t remember – was lately talking about the new icons, who look much more like the girl next-door (not too tall, not too thin, with feminine curves), and this could be directed to this particular girl.

Finally, there is something very interesting in the half-outfits. You can divide in two parts, bearing two personalities. It could be the natural equivalent to the half-shaved hairdo, or at least the asymetric haircut that made quite a comeback on fashionistas these last weeks. Now you can coordinate your dress to your hair. Sounds perfect. 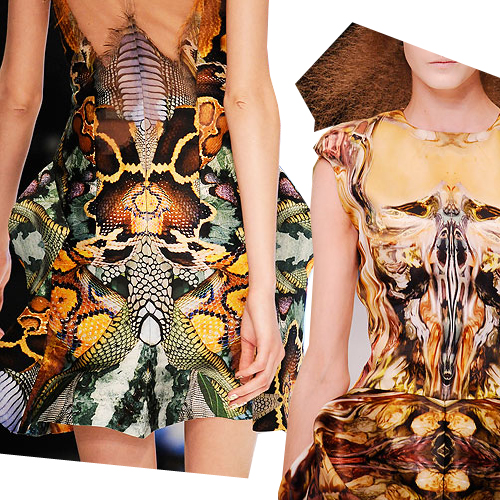 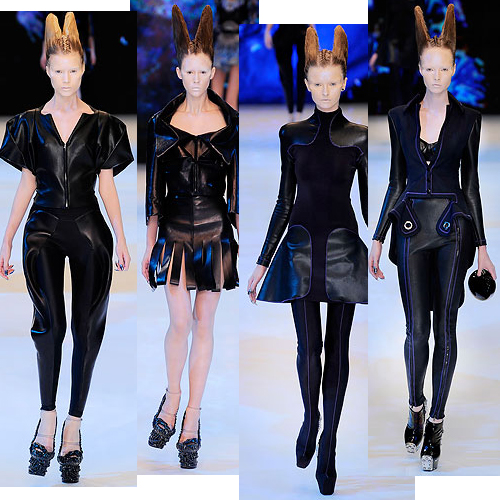